Are You the Greater Fool? 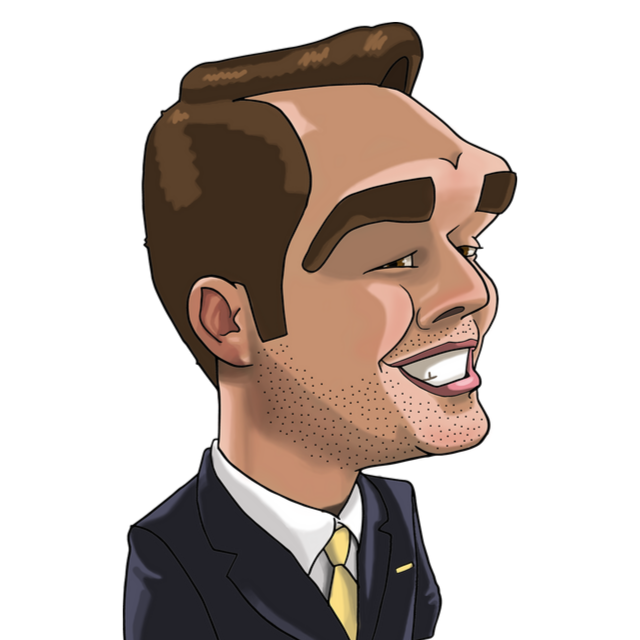 FOMO – the Fear Of Missing Out. I would guess that we have all experienced that fear of missing out in one aspect of our lives or another. Whether it’s buying the newest greatest TV or not yet seeing the latest movie everyone is talking about. It's human nature to feel that sense of belonging, to want to be part of the conversation and the action.

However, you decide to look at things and whether you adhere to any of the cool new acronyms making the rounds these days, I would argue they are probably best left out of your hard-earned retirement and investing decisions. When it comes to retirement and investing, forget FOMO and practice some much cooler things such as prudence, logic, and patience to name a few. Sure, it’s easy to get caught up in the hype, it happens to us all in some form or another – and it's okay. I’m just saying, try to keep it in other parts of your life and out of your retirement investing. A simple check to see if you are investing using FOMO or logic is to answer the following question. When you buy a stock, are you buying it because the company is profitable and you believe it will make you money over time, or are you buying it because everyone else is and worst case scenario, you can offload it to a greater fool sometime in the near future?

Pets.com: From Stock Star to Punchline

To prove my point, let's look at a few examples over time. Those of us who remember a day without iPhones probably remember Pets.com. It was at the heart of the Dot.com bubble and went from a sensation to a punchline in mere months. The beloved sock puppet was a hit, everyone wanted in on the action, and the IPO was hot. From that point onward though, everything went downhill. A little over a year later, investors who rode it all the way down received a mere 9 cents per share after liquidation, in other words they lost 99.2% of their investment.

I bet many of you are saying to yourselves, “I would have sold it long before then. Sure, I would have taken a loss but it wouldn’t have been as bad as holding it to the end.” That’s certainly possible, but it's also possible you would have said something more like this instead, “I know it's going down but it's going to come back, it will rebound, just give it time.” The dichotomy of those two scenarios is precisely where the problem lies, and where the internal questions abound. When do you get in? How much do you invest? Is this fun money or retirement money? When do you get out? Is this even a good investment? Is the company profitable?

Why burden yourself with the endless questions, and the constant internal nagging that you are making a mistake in some way? Perhaps a better approach would be to invest in the broad market. For example, if you invested $1000 in Pets.com at or around the IPO in February 2000, and for arguments sake you saw the writing on the wall in mid to late 2000 and got out, you would have been left with roughly $250, losing 75% of your initial investment. After that scare, you decided to just play it safe moving forward and invest that $250 in the broad market . Your $250 would be worth roughly $1,100 today.

Now, lets say you put that same $1000 initial investment into the same broad market , you just did it at the beginning instead of putting anything into Pets.com. Today you would have roughly $3,400, or a cool three times more money than if you invested in Pets.com at all. It may not seem like a big deal on a $100 or $1000 investment but imagine what that looks like if the investment was $10,000 or $50,000.

CGC: A Stock Craze that Sent Your Money Up In A Blaze

To help hammer this point home, let's look at another example. Fast forward to 2017 when pot stocks became a big hit. Let's look at the publicly traded Canopy Growth Corporation (CGC). Just like with everything else, if you had the wherewithal, or maybe blind luck, to get in extremely early and then the stomach to stick it out, you have received a nice return of 1,344%. That is awesome right? We all want to believe we would have done that, but the more likely scenario is you either didn’t buy it at all or you bought it once it picked up steam and became the hot stock of the day, being touted all over TV or Facebook.

For arguments sake, let's say you bought CGC at the end of 2017 as it was beginning its climb. Again, if you were able to stomach the roller coaster ride it has gone on for the last four years you are up almost 6%. Not bad, that’s an okay return. Well, unless you compare it to the broad market return of 54% over the same period. You have more than ten times as much money by taking emotion out of things, not buying CGC and making the snoozefest decision of just buying a simple broad market investment that no one on TV talks about and none of the kids think is cool. 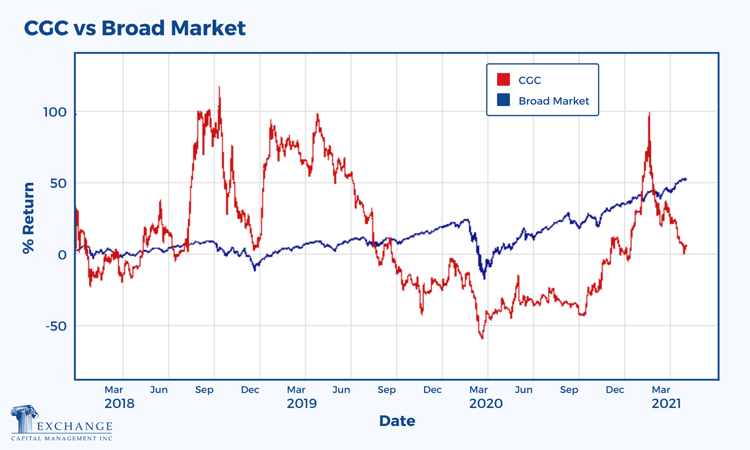 Are you up for another example? Let’s look back at what happened just a few months ago. A relatively thinly traded brick and mortar game store company ballooned seemingly overnight. The timeline may be fuzzy but GameStop stock started going up on January 11th and by January 26th it had more than tripled. If you got in before January 26th, you look like an absolute genius and even if you haven’t sold any of your position, you are enjoying a really nice approximate unrealized return of 97%.

However, it’s more likely that you were watching it all just like everyone else and you saw the infamous “GAMESTONK!!!” tweet, or heard all the stock picking experts all of a sudden talking about it. You saw the tweet or all the news coverage and thought, “hey I want a piece of this action, this thing can only go up.” If you bought after seeing this tweet and still hold it, you would be up about 2.16%. What a huge difference a day can make, but still not bad right, pretty good for only a couple months. 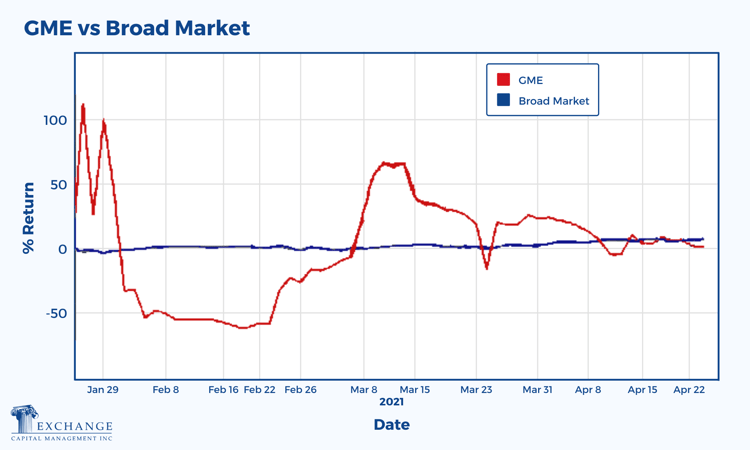 All of this is true, but let's look at it another way. If instead of putting $1000 in GME on January 27th, you put that $1000 into the broad market, what would you have today? It just so happens, you would have quite a bit more because the broad market had a total return of 8.9% over that same period. Not as exciting, sure, but as I have said throughout, if your goal is investing for retirement then you should be investing in profitable companies to help eliminate as much risk as possible in order to acquire gains on your investment.

To recap, sometimes you win and sometimes you lose. If you want to make bets based on the latest trending hashtag then have at it, but for your future self’s sake don’t do it with the money you have spent a lifetime saving for your retirement. We all want to have more money than we need and retire without worrying that we will outlive our retirement funds. The best way to do that is to work hard, spend less than you earn, and put together a financial plan that makes sense for you. These things will make you rich, not the hot stocks on the news tonight. Buy into profitable companies or the broad market to make money instead of looking for a greater fool to buy the stock that see-saws daily based on whatever the latest trend is. You may get lucky and win or you may be looking around for the biggest fool, only to quickly and painfully realize it's you. 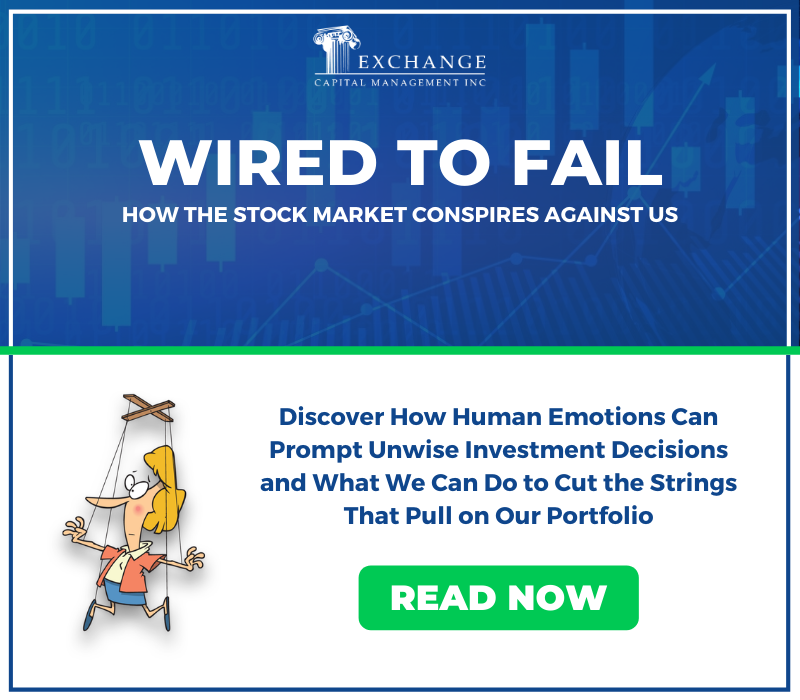 Matt Farris, is a Portfolio Manager at Exchange Capital Management.  The opinions expressed in this article are his own.